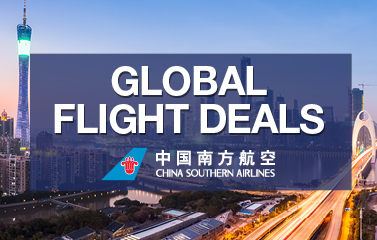 Global Sale! Fly to Guangzhou and beyond.

China Southern Airlines seamlessly connects you from Guangzhou to Europe and beyond.

Travel with peace of mind with the leading Chinese carrier* to popular destinations like London, Guangzhou and more.

Book your China Southern flights at Webjet by midnight, 9 December to save.

China Southern Airlines operates the largest fleet, most developed route network and largest passenger capacity of any airline in The People's Republic of China.

China Southern Airlines has formed an extensive network , covering all of China, radiating throughout Asia and linking Europe, America, Oceania & Africa, building an international network-oriented airline. China Southern operates more than 2000 daily flights to 224 destinations in 40 countries and regions across the world. Through close cooperation with its SkyTeam member airlines, China Southern’s network spans 1062 destinations to 177 countries and regions.

China Southern Airlines' safety commitment is - and continues to be - unwavering both throughout China and globally. On June 15th, 2018, China Southern Airlines was honored with the 2-Star Flight Safety Diamond Award by the Civil Aviation Administration of China (CAAC), becoming the leading Chinese carrier to maintain the highest safety records in China.

*Prices on this page are subject to change without notice, perform a search to view live pricing. Prices are inclusive of taxes and airline surcharges. Webjet fees per flight booking: Webjet Servicing Fee: Domestic $21.95, NZ/Pacific $24.95, International $32.95. Booking Price Guarantee: Domestic $12.95, NZ/Pacific $14.95, International $21.95. Varying payment fees are included in the price breakdown on Webjet’s checkout page, once your payment method has been selected.
*Prices are subject to availability, include taxes and airline surcharges. All prices on this page are subject to change without notice. Whilst Webjet makes every effort to provide you with accurate and up-to-date information, in the event a product is listed at an incorrect price, whether due to typographical, photographic, or otherwise, Webjet may refuse or cancel any orders placed for a product listed at the incorrect price.