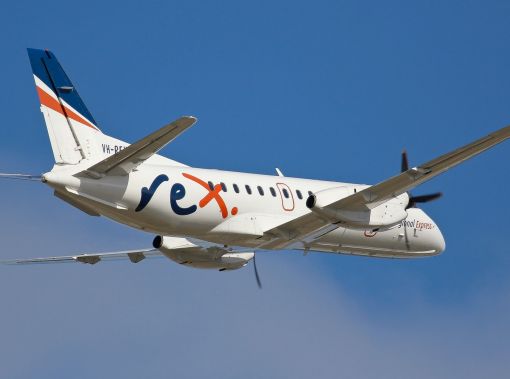 Rex has its roots firmly in the bush and in country Australia. Its tagline ‘Our Heart is in the Country’ boldly affirms this. Rex believes that the bush needs and deserves an air service of quality that provides good connectivity with capital cities at affordable prices, and Rex seeks to fulfil these expectations.

Since its formation, Rex has steered a course balancing the needs of regional communities for extensive and affordable air services and to be economically viable and sustainable.

The Community Fare is a unique and innovative fare scheme pioneered by Rex.

For last minute purchases within 24 hours before departure, all remaining unsold seats are then released at the Community Fare (Rex Promo) fare level. This is subject to remaining seat availability.

Rex Community Fares are non-changeable and non-refundable. Fares include a free checked baggage allowance of 15kgs, per person.

Rex Airlines passengers are permitted two items of carry on baggage, one briefcase and one small bag, or two small bags, with a maximum weight of 7kg. The two items must not exceed 23cm depth, 34cm height and 48cm length. One item of baggage can be substituted for a suit pack or garment bag (unfolded), as long as it does not exceed 11cm thickness, 60cm width and 114cm length. Cabin baggage is only permitted for passengers who are occupying a paid seat.

Rex Flex (Y) Class passengers and International Connecting passengers are permitted 23kg of included checked baggage. All other classes of travel are entitled to a maximum of 15kg checked baggage. Infants not occupying a seat have a 10kg allowance, and this includes items such as a stroller, carry basket, car seat and fold-up cot.

Rex Airlines offers frequent business travellers the opportunity to sign up for their Business Flyer program; membership is designed to help businesses save on their travel costs. The program offers two Reward Flights (exclusive of taxes and charges) for every 18 eligible routes flown. Each business receives its own Rex Business Flyer number, so there is no need for individual passengers to keep track of their own numbers. Businesses can earn points on all Rex Airlines flights, except those booked on Rex Net and Promo fares.

Rex Airlines passengers can make use of the Rex Lounges located at Sydney Airport's Domestic Terminal 2, Melbourne Airport's Terminal 4 and Adelaide Airport's Terminal 1. Some of the features of Rex Airlines' lounges include free WIFI, plasma TVs, and workstations equipped with computers and phones for free local calls. The lounges also have snacks, beverages including beer and wine after 3pm, and a wide range of newspapers and magazines. A private meeting room is also available in the lounges at Sydney and Melbourne Airports. To access the lounges, passengers require either an annual memberships or a casual pass (the latter is subject to availability). Rex Lounge members may invite one guest into the lounge, and a second guest may be invited in on a one-off visit basis (fee required).

Does Rex Airlines have a frequent flyer program?

Where does Rex Airlines fly to?

Is Rex Airlines a budget airline?

Rex Airlines is not a budget airline. It is Australia's largest independent regional airline, and was named the Regional Airline of the Year 2010 at the Air Transport World (ATW) Industry Achievement Awards.

Does a ticket with Rex Airlines include baggage?

You can now select seats and print your boarding pass. Rex Online Check-in at Webjet. Save time at the airport.