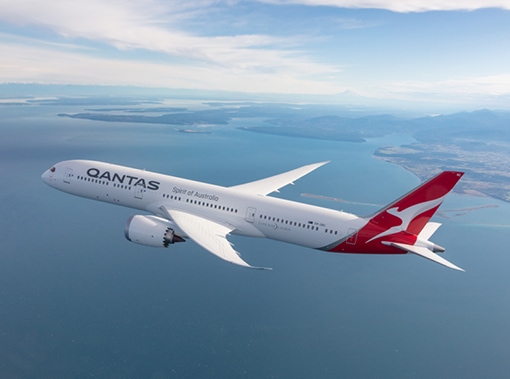 Discover the globe with Qantas

Qantas is not only the flag carrier for Australia, but it is also the third-oldest airline in the world, celebrating its 100th birthday in 2020. Known for the emblematic ‘Flying Kangaroo’ on its tail wing, Qantas now operates as Australia’s largest domestic and international airline.

There are services to all of Australia’s major cities, as well as regional centres such as Albury, Bundaberg, Tamworth, Wagga Wagga and more.

You can now select seats and print your boarding pass. Qantas Online Check-in at Webjet. Save time at the airport.

Departing from
*Prices on this page are subject to change without notice, perform a search to view live pricing. Prices are inclusive of taxes and airline surcharges. Webjet flight fees per booking: Webjet Servicing Fee: Domestic $21.95, NZ/Pacific $24.95, International $32.95. Booking Price Guarantee: Domestic $12.95, NZ/Pacific $14.95, International $21.95. Varying payment fees are included in the price breakdown on Webjet’s checkout page, once your payment method has been selected.

As one of the world's most reputable airlines, consider flying with Qantas on your next trip to New Zealand or the Pacific. Qantas has daily flights to New Zealand from most Australian capital cities and tourist destinations, so you'll be sure to find a Qantas flight at the right price and convenient time. 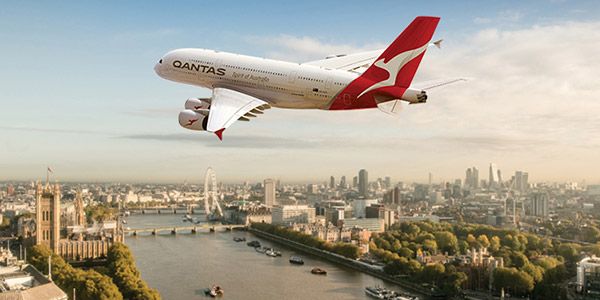 Domestic QF400 and above

Domestic connecting to international travel (QF4000 and above)

Passengers on a domestic flight that are travelling onwards on an international service, for example Canberra to Sydney to Los Angeles, may check-in up to 45 minutes before their first flight's departure. Qantas recommends passengers check-in at least 60 minutes ahead of the scheduled departure time.

Qantas' check-in counters close 60 minutes before departure for group check-in on domestic flights (QF400 and above) or flights departing from an Australian international terminal. The recommended amount of time between check-in and flight departure is at least 90 minutes.

Membership tiers and privileges are determined by the number of Status Credits earned. These privileges may include an extra checked baggage allowance, priority check-in, and global lounge privileges. There are five Qantas Frequent Flyer membership tiers: Bronze, Silver, Gold, Platinum, and Platinum One. The more passengers fly, the more Status Credits are earned, allowing passengers to progress to a higher tier. Please note that although Status Credits do differ from Qantas Points, they may be collected at the same time. As long as a member remains active, earning or redeeming Qantas Points or Status Credits at least once within 18 months, Qantas Points do not expire. Those wishing to become a member of the Qantas Frequent Flyer program must pay a joining fee of $99.50.

The Qantas Club is a membership program operated by Qantas. Members of the Qantas Club enjoy access to a wide network of domestic and international lounges and are entitled to a variety of membership benefits, from access to premium service desks and priority waitlisting to discounted rates on meeting room hire. In Australia, members may access Qantas Club lounges, offering refreshments, WiFi, shower facilities, business facilities and more, as well as Qantas Regional Lounges located in select regional airports.

An upgraded checked baggage allowance of 32kg is provided to Qantas Club members travelling domestically within Economy Class on Qantas and QantasLink services. Increased checked baggage allowances are also available on select international services. Members flying domestically in any flight class are given the option to check-in online, using the Qantas App or, in select airports, at a kiosk. Parking discounts of up to 30% are also available when members book online with Secure Parking's Secure-a-Spot online booking service. Members may upgrade from Economy Class to Business Class on domestic services, where seats are available, using their Frequent Flyer points.

All new members are required to pay a one-off joining fee of $399 or 70,000 Qantas points. One-, two- and four-year memberships are available, with fees determined by the member's country of residency. A one-year membership for Australian residents typically costs $540 or 78,000 points, while two years is $980 or 155,000 points, and four years comes in at $1,850 or 285,000 points. For each dollar spent when joining or renewing their membership by credit card or cash, Qantas Club members earn three Qantas Points. Becoming a member of the Qantas Club also makes joining the Qantas Frequent Flyer program easy, with a complimentary membership offered on sign up.

Eligible passengers may access the Qantas Club and Qantas Domestic Business Lounge. These domestic lounges are fitted out with everything from meeting rooms, free WiFi, showers and workstations, to barista-manned coffee stations, buffet dining, and an open bar. Other features may range from specialty dining options - the Spice Bar in Melbourne, the Pizza Bar in Perth, and the Cantina in Brisbane. A passenger's eligibility for lounge access is determined by their travel class and lounge location. Passengers accessing the Qantas Club and Business Lounges in select locations, including Sydney, Melbourne, Brisbane, Canberra, Adelaide and Perth, must follow a smart casual dress code. Some clothing items, such as gym wear, sleepwear and beachwear are not permitted, as are revealing, torn and unclean items, and those with offensive slogans or images. Footwear, excluding thongs, must be worn. Entry may be refused if clothing and footwear are deemed to be inappropriate or too casual.

Qantas Club lounges operate on a separate basis to other Qantas lounges. These lounges are available to Qantas Club members, as well as those who hold a Qantas Club Annual Guest Card, or those travelling on Qantas or Jetstar flights with Gold, Platinum or Platinum One Qantas Frequent Flyer status. Qantas passengers with a Gold, Platinum or Platinum One Qantas Frequent Flyer membership travelling on Emirates and oneworld affiliate airline flights may also access the Qantas Club lounge. When travelling within Australia, members may invite one guest to a Qantas lounge, while children up to three years of age are provided with complimentary access. Two children aged between four and 17 years are permitted to enter a Qantas lounge per member.

There are 24 Qantas Club domestic lounges located around Australia, including in Adelaide, Brisbane, Broome, Cairns, Darwin, Gold Coast, Hobart, Rockhampton and Townsville airports. Lounge features do vary from location to location, with most providing refreshments, a variety of beverages and bar services. Business facilities, including internet access, newspapers and magazines are also standard features of Qantas Club lounges. Lounges situated within Australia's larger airports, such as Adelaide, Brisbane, Canberra, Cairns, Darwin, Melbourne, Perth and Sydney airports, do provide additional amenities that may include barista-made coffee, family zones, showers and business meeting rooms. A smart casual dress code applies to Qantas Club lounges. Visitors must not be wearing clothing that is torn, dirty, revealing or depicting offensive slogans or images. Thongs, gym wear, sleepwear and beachwear are not permitted. Guests must be wearing shoes on entry. Entry may be declined if lounge staff consider clothing to be inappropriate.

The Qantas Domestic Business Lounges may be accessed by passengers who hold Platinum One or Platinum Qantas Frequent Flyer status, if travelling with a Qantas, Emirates, Jetstar or oneworld flight number. There are five Qantas Domestic Business Lounges in Australia, located at Brisbane, Canberra, Melbourne, Perth and Sydney Airports. Opening and closing times vary by location.

Qantas' domestic in-flight entertainment offering includes a variety of movies, TV shows, news and more. The selection of entertainment - covering latest-release films, classic episodes of TV favourites, and limited episodes of other series - is updated monthly. Entertainment can also be accessed on a passenger's own device (when travelling on domestic aircraft) using the Qantas Entertainment app. Make sure to download the app onto your device before leaving for the airport. The Qantas Entertainment app streaming service is only available when passengers are on-board the aircraft, and cannot be used when that aircraft has seat-back screens.

Qantas passengers travelling in Economy Class receive in-flight meal service as part of their airfare. The meal boxes and snacks champion Australian-grown produce, and the service of free wine and beer commences at set times, depending on the flight route. Passengers may purchase wine and beer at additional cost when travelling outside of these times.

Those travelling in Business Class on Qantas domestic flights are treated to a dining experience that has been designed in collaboration with Neil Perry. Business Class passengers are able to select meals from a wider menu that includes small bites, entrees and mains. The Qantas Rockpool Sommelier is on hand to guided wine choices.

For domestic flights within Australia, Qantas offers passengers the choice of Economy and Business Class seating.

Qantas' Boeing 737-800 Business Class passengers are seated in ergonomic reclining seats upholstered in leather, with extendable leg rests and wide seat backs providing additional comfort. Flights operated on an Airbus 330 feature the Business Suite, which comes with the freedom to have a seat in recline during take-off and landing. These seats convert to flat-lie beds and, as the cabin is configured in a 1-2-1 layout, all passengers have direct aisle access. Other features of the Business Suite seats include multiple personal storage spaces and power access.

Do you get food on Qantas domestic?

Do you get free drinks on Qantas domestic flights?