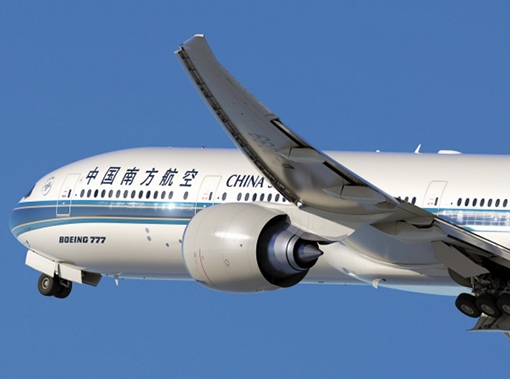 China Southern is the world's third largest airline and Asia's largest airline in terms of both fleet size and passengers carried. In 2013, China Southern Airlines transported over 90 million passengers. From its main hubs at Guangzhou Baiyun International Airport and Beijing Capital International Airport, the airline flies to 190 destinations using a fleet of 460 aircraft. Established in 1989, China Southern Airlines has an extensive domestic and international network flying 35 times a week from Sydney, Melbourne, Brisbane & Perth to the world via the Canton Route.

More people choose to fly with China Southern than any other Asian airline due to its convenience, exceptional service and highly competitive fares. Their 'Sky Pearl Club' Frequent Flyer Program has over 5.6 million members across the world, rewarding passengers every time they fly.

The distinctive bright red symbol on the tail fin of China Southern’s aircraft is that of the Kapok. Occupying a unique niche in the rainforest, this tall and stately tree rises above the canopy, providing a habitat for countless other plants and animals. The Kapok tree enables arboreal animals to move around the rainforest without having to come down to the ground. Its seeds are used for a wide variety of purposes. As a symbol for an airline, it is an interesting and substantive one.

In keeping with that symbolic message, China Southern has been extending its reach by actively upgrading both fleet and services. It signed an agreement with Airbus in 2010, putting six new aircraft on order, and in 2011 the airline launched additional services to Sydney and Melbourne and an entirely new route to Canada.

Situated 28km outside Guangzhou’s city centre, Baiyun International Airport is China Southern’s home port. Guangzhou is one of the most populous metropolitan areas in The People’s Republic of China. The city has historically been known as ‘Canton’ or ‘Kwangchow’ and is located on the Pearl River, roughly 120km north-northwest of Hong Kong.

The location is renowned for the intense and amazing beauty of the nearby mountain range. Baiyun – meaning ‘White Cloud’ – mountain was famous even in the days of the earliest dynasties; its picturesque beauty has inspired art, poetry and hearts for millennia.

Expansion of the Baiyun International Airport is ongoing, including the construction of a Terminal 2, with its own indoor and outdoor parking, a transportation centre and metro station, and a third runway.

In the meantime, as demand increases and construction continues it would be wise to anticipate delays. Despite the ongoing expansion, the existing facilities are very modern and the airport is well serviced by restaurants, rest areas, ATM’s, money exchange services, English signage, and free wifi.

Transfers to and from the airport are straightforward, with excellent bus, subway, airport shuttle and taxi connections with downtown Guangzhou.

Guangzhou is connected to Hong Kong by train, coach and ferry. The train between Guangzhou and Kowloon takes less than two hours, and frequent coaches depart every day, mostly from the major hotels. Travellers choosing to travel between China and Hong Kong, in either direction, should be aware that formal border controls are still in place. Check all visa requirements and leave plenty of time to complete formalities.

First Class offers luxurious seating, which can be programmed to recline at 180 degrees to create a cosy ‘cocoon’. Each seat comes with a footstool and attached LCD for video on-demand. There is a fold-down table for laptops and a closet for personal luggage as well as jackets and coats.

Dining is a flexible affair, with China Southern Airlines’ “On Demand” dining service, offering First and Business Class passengers the opportunity to order their meals and dining times in advance of their flight.

Economy class has standard catering and entertainment, with toiletries provided for flights over 6 hours.

China Southern's business class consists of 24 spacious seats, which can recline into an 180° full-flat position, with a total length of 188 cm and a width of 51 cm. The spacious 2 - 2 - 2 configuration offers all the space necessary to completely relax. Each business class is equipped with a 15 inch private LCD video touch screen, noise reducing headphones and a wide variety of Western and Chinese movies and entertainment. There are also several music channels available to enjoy your favourite music during the flight.

Economy Class provides comfortable seating in a comfortable 2 - 4 - 2 seat layout, with a 79 cm seat pitch. All seats are equipped with a private LCD video touch screen offering passengers a range of both Western and Chinese movies and entertainment. Economy Class customers can also choose between Western or Chinese meals, served with a wide range of drinks.