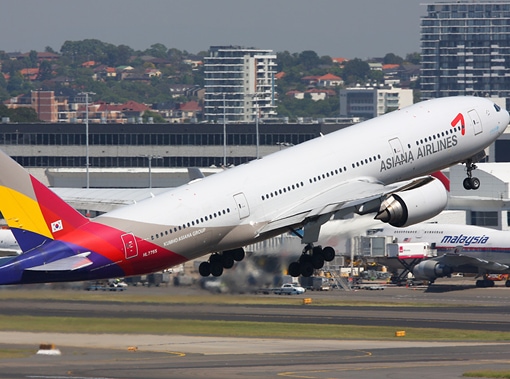 Asiana Airlines, based at Incheon International Airport in Seoul, is one of South Korea's two major airlines (alongside Korean Air), and has flights going into 73 international airports in 15 countries.

Asiana has a fleet of 62 aircraft and flies direct from Seoul to Sydney, daily.

Asiana Airlines was introduced as the second flag carrier in Korea in 1988.The company philosophy for Asiana Airlines is to take customers to their destination on time, in the fastest, safest and most convenient way. Asiana Airlines maintains the youngest fleet worldwide. Their 61 aircraft serves 45 cities in 15 countries, including 18 destinations within Korea. Asiana Airlines provides the largest connection between mainland China and the rest of the world, focusing not only on playing a significant role in covering all major Asian destinations, but is also expanding its global network coverage. In 2002, Asiana carried more than 12 million passengers with 283 scheduled daily flights. Asiana Airlines became a member of the Star Alliance in 2003, joining the world's largest global alliance and providing valuable network and loyalty benefits to customers.

In Asiana Airlines Travel or Economy Class, passengers can enjoy the comfortable and cozy mood and unique service offered only by Asiana Airlines. In particular, all seats in the A330-300 and B777-200 aircraft are equipped with an on-demand audio/video service (AVOD), as well as 6.5" LCD monitor. Asiana Airlines provides unique and elegant inflight meals including Western, Chinese, and Japanese cuisine in Travel Class. The departure country's food is served as the basic menu according to the operating route.

The inflight entertainment system of Asiana Airlines is AVOD, the Audio Video On Demand system. On Asiana Airlines the passenger can elect the movie, music, game and contents of choice using the AVOD system, with stop and resume playback settings that can be used at the passengers discretion.