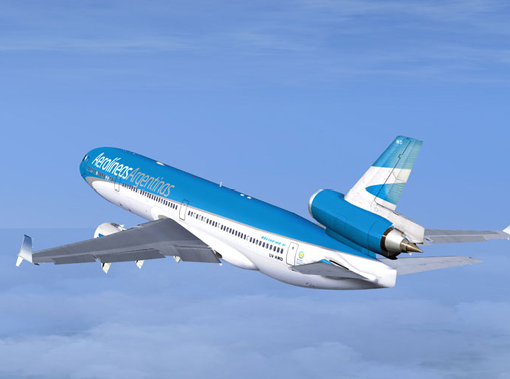 Aerolineas Argentinas is Argentina’s largest airline. Brought back under government control in 2008, the airline has embarked upon a complete revitalisation, adding key international destinations and increasing traffic on its domestic and regional network by improving access, equipment and services.

In 2011, Aerolineas Argentinas joined SkyTeam, the second largest airline alliance in the world with a global network that serves over 474 million passengers annually.

Aerolinius Argentinas flies from Sydney, via Auckland to Buenos Aires several times a week. The trans-oceanic South Pacific route takes about 19 hours, including the stop in Auckland.

Once in Buenos Aires, it is relatively straightforward to get around. Domestic and regional flights are largely concentrated at Aeroparque Jorge-Newbery (airport code AEP), including some flights to Argentina’s neighbours like Brazil, Paraguay, Uruguay, Chili and Peru.

Passengers travelling on Aerolineas Argentinas are provided with complementary transportation should they need to transfer between airports.

The Visite Argentina Airpass, which must be purchased before travel to Argentina, offers discounts on domestic travel in economy class, on both Aerolineas and their domestic subsidiary airline, Austral. Visitors are urged to obtain discount travel passes before they arrive, as the domestic pricing system for foreign travellers (i.e. anyone without an Argentinian ID), is charged at higher rates for air, bus and train travel.

The Paris of South America

Originally founded by the Spanish on the shores of the Rio de la Plata in 1570, Buenos Aires became a strategic port for smuggling. On 25 May 1810, a group of ‘Portenos’ (People of the Port), resisted Spanish dominance and began a revolution that ended in 1816 with their independence.

In 2010, Buenos Aires celebrated its 200th anniversary with a re-affirmation of its place as the cultural centre of Argentina: a city of history, art, literature, dance and music and the capital of a country where migrants from all over the world coexist as a nation of remarkable people amidst extraordinary natural beauty.

Ranked as a 3-star carrier, Aerolinius has embarked on an ambitious and steady program of upgrade and improvement.

Under this revitalisation program, Aerolinius Argentinus and their domestic subsidiary, Austral, began an upgrade of their fleet in 2009. Their operating fleet of 16 Boeing 737s are expected to be retired by 2012 and delivery has been taken of 14 Boeing 737-700s, four A340-200s and three A340-300s. The airline also operates three 747/400s and two McDonnell Douglas MDs. Further deliveries of the Airbus A340s are expected later in 2011 or 2012.

Complimentary food and beverage is offered on all international flights and entertainment videos are screened, although personal screens are not available on the older aircraft.

The Aerolinius Argentinus frequent flyer programme is called Aerolinius Plus. Points are earned by flying with the airline and its subsidiaries, and through transactions with selected partners. Benefits include additional baggage allowance, priority check-ins and, for Platinum card holders, entry to the exclusive VIP lounges in a number of domestic airports.